Permanent home for the poor in Vietnam 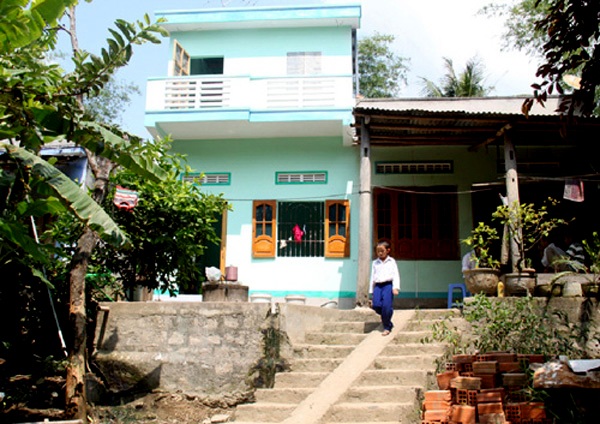 More than 30 years ago, the United Nations General Assembly took an important step in promoting the idea that everyone deserves a permanent place to live by declaring that the first Monday in October would be World Habitat Day. Habitat for Humanity asks everyone to join together as one global network in communicating the message that every one of us deserves the opportunity for a better future, and that a permanent place to live can remove barriers to opportunity, health and success. Over 14 years, VBSP has helped the poor access to more than 500,000 permanent houses in Vietnam.

First, VBSP implemented the housing credit program for poor households under Decision No.167/2008/QĐ-TTg dated 12th December 2008 promulgated by Prime Minister during 2009 – 2012 (period I). This is one of the most effective credit programs for the poor to access permanent houses since Vietnam initiated the innovative reform. For four implementing years only, the total loan volume reaches VND 3,853,970 million and the loan repayment is VND 10,963 million. It supported more than two million the poor access to stable and safe home which contributes to improving their living standard and comfortable to earn living.

Further to the success in the first period, the Prime Minister decided to sign Decision No. 33/2015/QĐ-TTg dated 10th August 2015 on the housing support for the poor during with the implementation duration in 2016 - 2020. For two starting months only since July 2016, the loan volume reaches VND 18,532 to help building 743 safe houses for 743 borrowers.

We visited the household borrower of Nguyễn Thị Vì, Tay ethnic minority in Bản Muổi hamlet, Lâm Thượng commune, Lục Yên district, Yên Bái province. Unfortunately, her husband died in the military battle, then she earned a living herself to take care of her children in a dilapidated house. Vi said “I had to stay up all night during the rainy season to get rainwater by bucket...”. In 2010, I applied for a loan of VND 8 million from VBSP and added with VND 10 million supported by the local authority and other contributions from her relatives to build a new and firm house to stabilize her family life.

The poor household of Đoàn Đại Thêm, living in Dương Nổ Cồn hamlet, Phú Dương commune, Phú Vang district in Thừa Thiên Huế province, is still shocking when remembering again about the last flood that swept all his equity. He remembered “My family is poor and living in an temporary house. When floods attacked quickly, we have to run and evacuate in high buildings. After coming back home when out of flood, nothing is here; rice, chickens, ducks, cows are gone with flood”.

Thanks to the loan from VBSP added with other support, Them has had a flood-proof house buil since 201, helping all family members to feel relieved and stabilize lives during typhoon seasons.

In addition, VBSP has implemented the housing loan program with differed repayment in Mekong River Delta and Highland since the early days of VBSP establishment. As of late August 2016, gross outstanding loans reaches VND 998 billion serving more than 83,000 active borrowers. The loan volume is VND 1,121 billion and the loan collection is VND 998 billion as well as 104,739 firm houses are built for local residents.

The household of Ms. Nguyen Thi Nhiem, living in My Khanh 2 hamlet, My Hoa Hung commune, Long Xuyen city in An Giang province was entitled to borrow VND 20 million from VBSP in 2014 to build a new house. She says “Since moving to the new house in a new place, we have not no longer worried about flood of storm and travelling is more convenient. My family is now working as a retail trader in the local market, bringing about more stable incomes than before”.

In conclusion, through the housing loan programs for poor households living in typhoon areas, VBSP has helped the poor build permanent houses stabilize and develop business and production, lift from poverty, contributing to the new rural development in Vietnam.

Nevertheless, in the context of increasingly unpredictable climate change, the local residents have to face with losses and damages due to natural disasters in flooded areas. There is a need to mobilizing multi resources and support from domestic and international individuals and organizations to help the poor have stable, secure house, gradually improve living standards, contributing to sustainable poverty reduction.