Administration and management: VBSP’s administration is the Board of Directors (BOD), the BOD has a number of Representative Units at provincial and district levels (headed by Chairpersons or Vice-chairpersons of equivalent-level People’s Committees). Managing VBSP is a General Director and his/her subordinates.

Financial regime: Its fiscal year begins on January, 1st and ends on December, 31st of the calendar year. VBSP is a concentrated accounting unit in the whole system with financial autonomy; self-responsible for its own operation legally; implementing capital maintenance and development; covering costs and credit risk.

Risk management: VBSP shall provision credit risk as part of operational costs to cover all the risks arising from the individual and local cases beyond control according to regulations of the Government (at present, provision rate is equal to 0.02% of the average annual loan outstanding). In case the provisioning is not sufficient to cover risks of the year, VBSP submit to the Governmental for additional compensation.

A nation-wide network from Head Office to communes has been constituted:

Administration: Includes BOD at central level and BOD Representative Units at provincial, municipal and district level (Headed by Chairperson or Vice- chairperson of People Committee at the same level), of which: 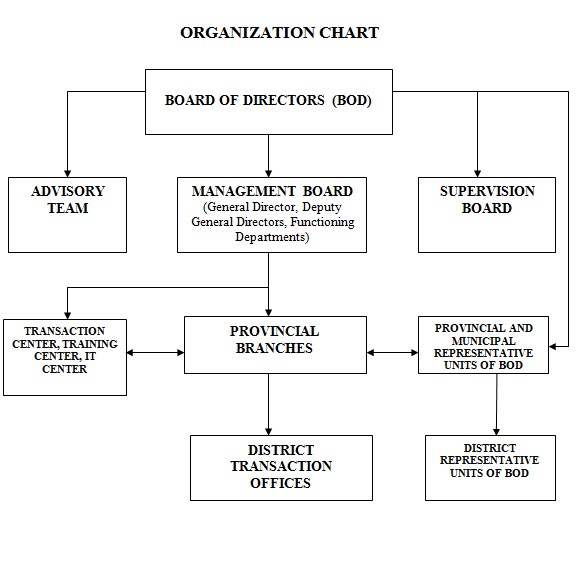