On 20/9/2004, the Prime Minister signed the decision to select October 13th to be Vietnam Entrepreneur Day. Since then, entrepreneur community in Vietnam has been constantly growing, confirming its role in domestic and international arena.

Especially the new generation of entrepreneurs who are not only equipped with sufficient knowledge but also inherit assertiveness, sensitivity have been developing, contributing to the country development, arousing passionate of young people and bringing good practices to the society and community.

After 14 years of operation with more than 20 credit policy programs, as of September 2016, total capital of VBSP is 157.5 trillion and total loan outstanding is 150.7 trillion. Policy credit quality is constantly being strengthened; delinquency rate accounts for only 0.87% of the total capitals.

As a Government-owned bank implementing preferential credit programs of the State including lending to SMEs, traders in disadvantaged areas in accordance to Decision No.92 and lending for job creation in order to solve the shortage of capital for start-ups, SMEs local in areas having lack access to commercial loans due to high interest rate; or to help businesses in disadvantaged and isolated areas to improve and create a system of goods distribution, such as wholesale markets, grocery stores, shops to meet daily needs and production of ethnic minorities helping to improve livings of local people. Despite many difficulties and challenges, VBSP policy credit operations has left strong imprint on the path of poverty reduction and ensuring social security. 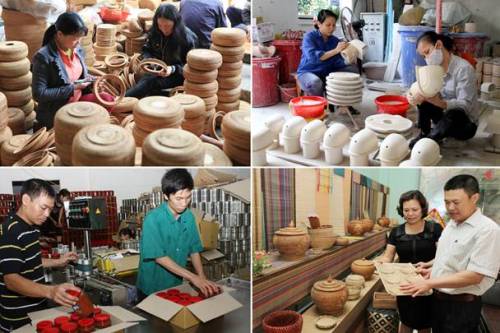 Nearly 2,900 SMEs got loans from VBSP with funding from KfW

After more than 11 years of implementation (2005-2016) VBSP has disbursed over VND 909 billion, providing loans to nearly 2,900 SMEs, mostly small businesses and start-up businesses.

Lending to traders doing businesses in disadvantaged areas has created favorable conditions for traders to access to preferential credit of the Government, contributing to agricultural and rural development and ensure even economic growth between regions in the country.

The program has been implemented in accordance to Decision of the Prime Minister. Traders who are individual not opening bookkeeping and not paying presumptive tax as prescribed by tax authorities can borrow up to VND 50 million.

After 6 years (2009 - 2016), total lending of the program is VND 1.050 billion with more than 33,000 turns of borrowers. Traders in remote areas have an important role in the circulation of consumer goods, consumption of agricultural products for farmers, and promote development of trade.

As a customer borrowing from the program for traders in disadvantaged areas, Mr. Lo Van Chuong in Tam hamlet, Chieng Den (Son La) has used loans from VBSP effectively to invest in economic development. Chuong’s family has a long time of purchasing agricultural products in Chieng Den. However, as lacking of capital, his family just “revolved” capital by buying and selling seasonal agricultural products. In 2010, he got a loan from VBSP, along with his savings; he invested in agricultural drying court and kiln. Then, he could purchase fresh corn and cassava at the lowest price, dried and stocked to sell gradually for animal food processing enterprises at high prices. To obtain a stable source of agricultural products, Chuong mobilized investment capital to invest in fertilizer and maize seeds to farmers in the region, then bought back the product. Annually, at harvesting seasons, he can purchase nearly 700 tons of agricultural products including maize, cassava and coffee.

Chuong said: "When having no drying court and kiln, procurement of agricultural products was moderate due to lack of preservation. As taking 100 million dong from VBSP, I was hesitated whether to invest in drying court and kiln or not because the idea was good but if I failed how could I pay debt to the bank. However, VBSP staff encouraged me several times and thus; I invested and obtained very good results".

It was found that, in recent years, lending to traders in disadvantaged areas have been a motivation, a bridge to support commercial development in mountainous communes, bringing changes to the rural areas, allowing farmers to escape from poverty and improving living conditions of local people.

According to statistics, during the years, millions of people have jobs, hundreds of thousand households have successfully developed family economy and thousands of businesses have become "bright spots" thanked to job creation loans from VBSP.

Visiting a successful private enterprise producing handicraft naming Tay An in Tay An commune, Tien Hai district, Thai Binh province, we met Pham Thi Ngan, the enterprises’ owner. She shared, with wishes to do something for the hometown; she chose traditional sedge handicraft to be her career.

Starting from 1996, but until 2003, her handicraft production developed fast. Ms Ngan recalled: “I only had an old bicycle to go introducing my products, lacking of capital leading to difficulties in production expansion”. Later, Ms Ngan’s business was funded VND 50 million from VBSP job creation credit program. As using funding effectively, she was eligible to borrow another loan of VND 400 million from VBSP. With a diverse product categories and models, Ms. Ngan managed to export products to many countries around the world such as Japan, USA, France, and China, creating jobs for 20 direct workers and 5000-7000 involved labor with an average income of VND 3 million/person/month for direct employees and VND 1.7 to 2 million/person/month for involved labor.

Another successful model is the face washing towel business of Mr. Nguyen Van Hoat in Team 8, Thuong hamlet, Phung Xa commune, My Duc district, Hanoi. In 2015, he borrowed VND 300 million from job creation program of VBSP to buy industrial textile machine to manufacture face-washing towel. Currently, he hired 12 direct workers and 10 partime workers with highest and lowest monthly salary of VND 8 million and VND 3 million respectively. Annual revenue of his business is around a billion VND.

In general, the job creation credit program has been successful in lending to right businesses which using funding with right purposes and ensuring timely payment. Thanks to convenience access and effective use of loans, the program has contributed to job creation for many workers as well as supporting production and business establishments and expansion.