The message came from Chu Xuan Dung, Deputy Chairman of Hanoi People’s Committee and head of the board representing the Board of Management of VSBP's Hanoi branch. He was speaking at a recent conference reviewing the 20-year deployment of Decree No.78/2002/ND-CP on policy credit earmarked for needy households and other policy beneficiaries (Decree 78) which was hosted by Hanoi People’s Committee. 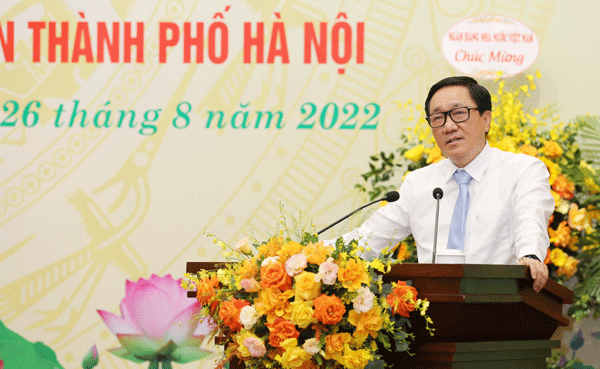 According to the conference, through the efficient operation of VSBP's Hanoi branch over the last 20 years, the city has lent $1.86 billion to more than two million needy households and other policy beneficiaries.

Policy credit sources have reached every corner of the city, helping those in need in a timely manner.

Those capital sources have helped over 243,000 city-based households to escape poverty, created jobs for more than 814,000 laborers, and given loans to nearly 147,000 needy students.

About 746,000 clean water and sanitation works in the city’s suburbs were either built or upgraded with loans taken from VBSP’s Hanoi branch, along with the building of 11,375 gratitude houses for needy people.

Policy credit has played a role in limiting shark-loan practices in rural areas, helping residents to gain access to bank loans and change their mindset about effective capital usage, gradually improving their standard of living.

Balances from the authorized city-level budget amounted to $239 million, and those from the district-level budget reached $31 million.

Over the last two decades, authorized policy credit sources from Hanoi's budget through VBSP’s Hanoi branch have reached more than 580,000 needy households and other policy beneficiaries and have helped to create stable employment for over 630,000 laborers.

The gains in exercising policy credit activities over the past two decades attest to the policy's correctness and its suitability for the socioeconomic situation. It has effectively met the needs and aspirations of the majority of people, particularly those most in need.

It proves the important role of policy credit, which contributes to ensuring the implementation efficiency of the orientations, tasks, and targets set out by the Party and the state.

The branch has reported very low overdue and frozen debts, which stood at just 0.024 per cent compared to the system’s average of 0.67 per cent.

Hanoi is also one of the localities that always pays great attention to supporting the operation of VBSP’s Hanoi branch through increased authorized capital volume taken from the city budget, which has touched $277 million – the highest level nationwide.

Aside from recognizing the gains from executing policy credit in the city and the commitment of Hanoi management at different levels, VBSP General Director Duong Quyet Thang – who is also a member of the Central Steering Committee for the implementation of national target programs during the 2021-2025 period – required Hanoi management authorities to further place emphasis on ensuring effective governance of policy credit activities, in which top priority must be given to areas with high rates of needy households and economic targets must be closely linked to social goals.

Thang noted that it is also necessary to encourage people to make their fortunes legitimately while gearing efforts towards poverty reduction sustainability.

VBSP General Director  also stated that the Hanoi branch must strictly follow the targets and norms set in VBSP’s development strategy for 2021-2030 and Hanoi’s socioeconomic development goals to ensure the efficient implementation of the multiple policy credit programs that are to be distributed during the period.