Escaping poverty along with the methodical breeding model

Visiting the business model of Quach Thi Sum in Nang village, Quyet Thang commune, the garden campus and the systematic livestock barn system were the results of the efforts to overcome difficulties of the typical female member of Quyet Thang commune Women's Union. 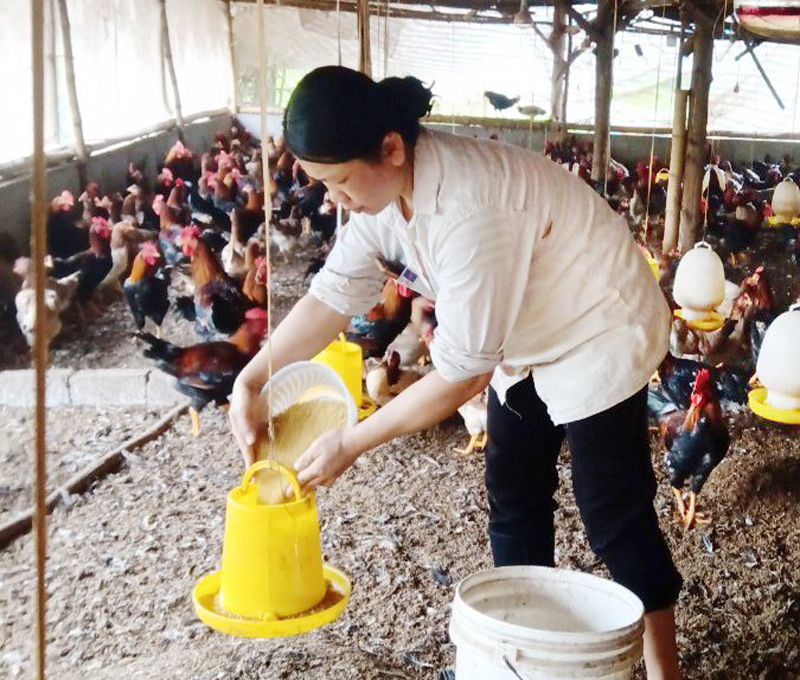 Sum was born in a family with difficult circumstances. Even when she got married, her family still lacked the budget to invest in production and economic development. In which, the only property was 1 hectare of hilly land left by their grandparents. She has worked many jobs to earn money to pay for their lives and raise their children. Until 2017, she courageously borrowed VND 100 million from the entrusted budget from VBSP to invest in building a barn and buy 500 breeding chickens to raise.

At first, her family faced many challenges due to a lack of experience and knowledge in raising chickens. However, Sum has diligently studied through the media, books and newspapers, actively participated in training courses on chicken raising organized by the commune Women's Union. She also visited successful chicken raising models in other communes. Therefore, she applied what she had acquired to her business model. The result was positive, in which chickens grow well, stably and less infected with the disease. The income from selling eggs and broilers was developing significantly effectively.

After having a stable income, in 2019, her family expanded the scale of raising 2,000 broiler chickens and planting more fruit trees. Up to now, her family has a total income of 250-300 million VND per year. Moreover, she has continued to use this money to buy excavators, hire drivers, and create a job for 1 local person with an income of VND 9 million per month.

Ms. Sum shared: "Acquiring this achievement is based on my determination and efforts to escape poverty. Furthermore, it is the encouragement from the commune Women's Union and the supported loan from VBSP for initial investment.

Chairwoman of Quyet Thang commune Women's Union, Mrs. Bui Thi Xiem said: "Sum not only takes care of her family but also is an enthusiastic and active member in movements and activities at the branch. In particular, she often shares experiences in animal husbandry, helping other women in difficult circumstances borrow money without interest to invest in business development. She is an example for many women to learn and follow.”