For more than a decade, Vietnam has achieved fundamental successes in the field of socio-economic, poverty reduction receiving recognition by the international community. Poverty reduction is a major and consistent policy of the Party and the State in the process of implementing national renovation and construction. According to the Ministry of Labor, Invalids and Social Affairs (MOLISA), in the period of 2011-2015, Vietnam's poverty reduction goals have achieved important results, the poverty rate of the whole country has decreased from 14.2% (2010) to 4.25% (2015). The Prime Minister has just signed Directive No. 01/CT-TTg dated January 6, 2017 on strengthening implementation of the National Target Program for Sustainable Poverty Reduction in the period of 2016-2020; which requires focusing on 3 groups of policies: (i) Supporting production development, improving incomes for poor households; (ii) effectively support the poor to access basic social services and (iii) develop infrastructure in disadvantaged areas with high poverty rates.

Vietnam Bank for Social Policies (VBSP) is considered a leading bank, playing an irreplaceable role in poverty reduction, as each domestic commercial bank has its own characteristics and areas of operation, thus, impossible to focus on the poor, near poor and households who have just escaped from poverty. After 15 years of construction, development and growth, VBSP has always tried to overcome many difficulties, challenges, achieved outstanding development in both scale and quality, along with the whole banking sector, contributing positively to successfully implement the political tasks entrusted by the Party and the State, to economic development and social security. VBSP always affirms its role and position in poverty reduction, highly appreciated by the Government, ministries, authorities and the people.

According to statistics of MOLISA, the whole country has more than 2.31 million poor households (accounting for 9.79% of the total number of households nationwide) and more than 1.24 million near poor households (accounting for 5.27%) according to the multi-dimensional poverty line for the period of 2016-2020. Application of multi-dimensional poverty line has increased the poverty rate from less than 5% in 2015 to more than 9% in 2016. According to surveys of the General Statistics Office (GSO) in 2015, the Northwest mountainous region has the highest poverty rate in the country with 34.52%, followed by the Central Highlands and the Northeastern mountainous region with 20.74%, the region with lowest rate is the Southeast with 1.23%. Poverty rate of the Red River Delta is only 4.76%.

Policy credit is considered an important solution to implement the national goal of poverty reduction in a fundamental and sustainable way. Economic development coupled with poverty reduction is a consistent policy of the Part in the process of reforming and building a socialist-oriented market economy. The policy of credit support for the poor and poor areas has been deeply concerned by the Government and has become a sustainable poverty reduction tool. With the policy of "giving a fishing rod instead of fishes" to help poor people with capital for production and to help them step by step access with the market economy is the goal set by the Government of Vietnam in the economic development stage of 2010-2020. 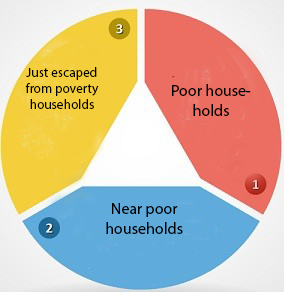 Sources: Implementation of credit to poor households in 2015 and 2016 of VBSP

Policy credit implemented by VBSP in recent years has been evaluated by the Party, National Assembly and Government agencies as an innovative, effective and deeply humane solution, consistent with context of developing countries in general and Vietnam in particular, a key element in poverty reduction policies. A remarkable point in development focusing on poor customers is to help them access loans  through the network of VBSP. At commune transaction points, VBSP disburses loans to and collects debt directly from each borrower. Bank officials always publicize the regimes, policies, and lists of disbursed households and outstanding loans of each loan program. In addition, VBSP also announced new regulations, interest rates of credit programs through information boards to help people understand regulations and improve understanding of each preferential credit program. The transaction points also help reducing travel costs for borrowers during the transaction process with the bank. VBSP with a unique and creative model has helped channeling preferential credit timely and effectively to the right beneficiaries.

In addition to credit activities, receiving deposits from poor households and policy beneficiaries also creates significant changes, helping the poor to increase their accumulation and improve the quality of life. VBSP staff, mass organizations, Savings and Credit group’s leaders and borrowers are fully aware of the meaning and effect of savings. Group members will help poor customers to have a habit of saving through monthly deposits in order to accumulate  for future use in addition to paying  loans in full and on time. VBSP receives deposits from Savings and Credit groups as a service for the poor and other policy beneficiaries.

The deposit product for Savings and Credit groups’ members of VBSP shows a good growth trend since it was developed, especially, after the 2014 product mechanism revision, deposit balance and number of customers participating have a significant increase. However, if compared with total capital or outstanding loans of VBSP (as of August 31st, 2016, the total capital of VBSP reached nearly 158 trillion VND, outstanding loans reached nearly 151 trillion VND), deposits from Savings and Credit groups’ members still account for a very small percentage, not reflecting the real capacity of such a large bank in microfinance  as VBSP.

It can be seen that the credit and savings activities for poor households of VBSP have gradually helped achieving significant achievements in poverty reduction, improving the quality of life and fulfilling economic and social objectives set by the Government.

Policy credit and savings for poor households are an important component in Vietnam's national target program for sustainable poverty reduction. In recent years, the system of preferential policy credit has been constantly improved, creating conditions for the poor and other policy beneficiaries to access the State's preferential credit capital to step by step improve living conditions, creating a strong and comprehensive change in poor areas and ethnic minority areas. VBSP has been making extensive changes to develop the community, aiming at more poor households to help them gradually escape poverty, develop production, business activities, and stabilize their lives. Details are as follow:

(i) First, VBSP has mobilized the participation of the whole political system in lending to poor households and other policy beneficiaries, VBSP has entrusted 4 mass organizations to be supervisors and trustees of a number of tasks in delivering policy credit. With such method, it is no longer a private job of the banking industry but has been gradually socialized - this is the method of managing credit capital with innovative policies, tailored to Vietnam, creating conditions for authorities, banks, associations, unions, especially grassroots levels to regularly approach people.

(ii) Secondly, VBSP has received the help of the State Bank in strengthening cooperation and mobilizing capital from international organizations to have more capital to implement credit programs for poor households and other beneficiaries. In addition, the State Bank also provided capital support for VBSP through refinancing channels to ensure funding for policy beneficiaries.

(iii) Thirdly, VBSP has done a good job of propaganda for the poor to access and effectively use loans. It is the strengthening of information dissemination so that all people can grasp guidelines and policies of the State and VBSP's regulations on preferential credit to help the poor and disadvantaged households to have awareness and understanding of their rights and responsibilities.

(v) Fifthly, basically the legal framework for credit for the poor, near-poor, newly escaped from poverty has been added to create favorable conditions in providing preferential credit. The policy formulation has been coordinated and effectively integrated with technical assistance, technology transfer, encouraging and replicating models of effective production, business and farming of each locality to poor households to help them  quickly escape from poverty.

After 15 years VBSP accompanies with the poor and policy beneficiaries, its achievements show that VBSP has been implementing very well and very successfully policy credit programs, contributing positively to the socio-economic development of the country. .