(VBSP News) Officially established and put into operation on October 4, 2002. The 20-year journey as an "extension arm" of the Government to bring preferential capital to the poor and other vulnerable people of the Vietnam Bank for Social Policies (VBSP) is full of hardships and difficulties. However, the most important thing is that the capital has brought a better life to every household in Vietnam. Over the past 20 years, more than 42 million households have received policy loans to get out of poverty

In early 2002, poor households accounted for nearly 30% of total households nationwide. They mostly live in extremely disadvantaged areas with undeveloped infrastructure so the task of "lending Government capital to the poor" is not easy. Therefore, VBSP has closely coordinated with 4 mass organizations: Women's Union, Farmers' Union, War Veteran's Association and Youth Union to entrust them some steps in lending process.

Commune transaction point with fixed monthly transaction date is a breakthrough initiative of VBSP. It is a step forward in reforming administrative procedures to bring policy credit to people in a timely manner with the motto "Transaction right at home and disbursement right at commune".

In that context, VBSP not only promotes its role as an "extension arm" of the Government and implement social credit policies, but VBSP also gradually promotes the role of "bridge" between the the poor and the Government. Moreover, VBSP proposed and advised the Government to promulgate many new credit programs and increase the loan size to meet the urgent requirements of the people. From 2 credit programs, VBSP has been implementing 22 credit programs across all of communes, wards and townships to help the poor and other policy beneficiaries develop their economy and improve their quality of life. 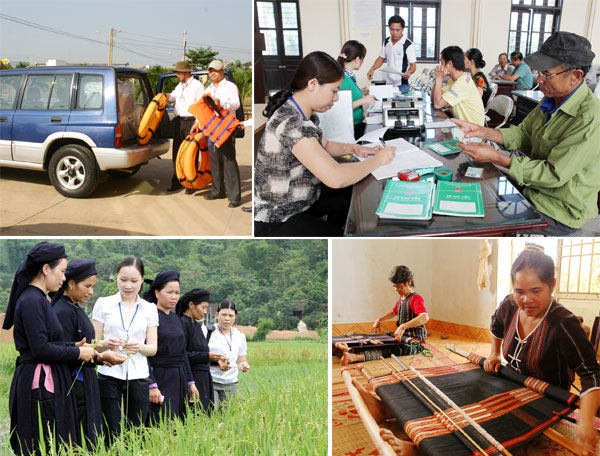 Up to now, VBSP has set up nearly 11 thousand commune transaction points located at the commune People's Committee and nearly 180 thousand Savings and Credit Groups in villages and hamlets

In the past 20 years, more than 42 million households have received VBSP’s loans with over VND 814 trillion; contributing to reducing the poverty rate in the period 2011 - 2015 from 14.2% to 4.25%; the multidimensional poverty rate decreased from 9.88% (in 2016) to 2.75% (in 2020). All of these efforts and results contribute to making Vietnam become a bright spot in the implementation of the Millennium Development Goals on poverty reduction recognized by the world.

In order to accelerate the journey of sustainable poverty reduction, in addition to focusing on poverty reduction, VBSP also focuses on lending job creation, disadvantaged student and other credit programs to improve quality of life. These will be the driving forces to contribute to the implementation of two national target programs, above all, to promote the country's economy rapidly and sustainably, towards a high-income country by 2045.