(VBSP News) Nearly 16,000 disadvantaged students in the Cửu Long (Mekong) Delta province of Long An over the past five years have received soft loans worth a total of VNĐ420 billion (US$18 million) from the Việt Nam Bank for Social Policies (VBSP). 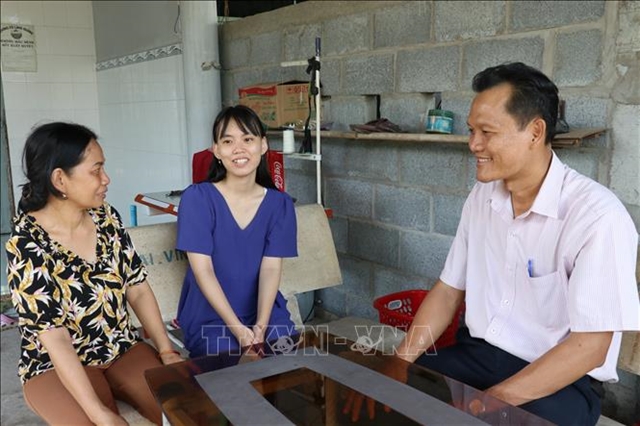 Đặng Thị Tuyết Thanh in the province’s Bến Lức District was able to continue her study at the HCM City University of Technology (HUTECH) after receiving a soft loan.

“The soft loan has lessened pressure on my family and created favourable conditions for my study,” she said.

Nguyễn Thị Kim Hồng in the province’s Tân An City said her family was facing financial difficulties when her son enrolled at the HCM City University of Technology (HCMUT) under the Việt Nam National University HCM City (VNU-HCM) in 2014.

The family’s main income is from farming agricultural products on 0.6ha of rented land.

Hồng's family received a soft loan from the VBSP for her son, who has graduated from the university. “I hope my son can get a stable job and help the family pay off the debt,” she said.

Lê Bá Chuyên, deputy director of VBSP’s branch in Long An Province, said the bank has granted loans since 2014 to tens of thousands of local households to help their children pursue study.

“The access to concessional loans helps disadvantaged students cover their living costs and tuition each school year,” he said.

Most borrowers make payments on time, and the rate of overdue debts is low.

The preferential credit programme for such students is promoted in all localities in the province.

Because of rising students' living costs and tuition, the bank has asked the Government to increase the loan amount for those living in difficult circumstances. — VNS