Vietnam Bank for Social Policies (VBSP) is a state-owned financial institution to provide inclusive financial products and services to improve livelihoods for the poor and other disadvantaged groups. It was originally established as the VBP (Vietnam Bank for the Poor) in 1995 in order to provide low interest credit without collaterals to poor households. The standard of poor households can obtain VBSP’s loans is regulated from time to time by the government.

Our mission is to improve living standard for the poor, low-income, women and other marginalized ones by providing them with inclusive financial services and create favorable conditions for them to participate actively in socio-economic activities and raise their position in society. VBSP aims at sustainable poverty alleviation, job creation, combat climate change, water and environment sanitation, gender equality, disability inclusion and social security.

As the biggest microfinance provider in Vietnam, VBSP’s vision is to provide the best inclusive finance services for the poor and other disadvantaged individuals and their families, helping them improve socio-economic empowerment and contribute to sustainable poverty reduction.

Vietnam has 54 ethnic groups, including 53 ethnic minorities with 14.6 million people, accounting for more than 14% of the national population. Most of ethnic minorities live in remote areas over 5,266 communes, 548 districts, 51 provinces and cities. The situation of poor and near-poor households in ethnic minority and mountainous areas currently remains one of the biggest challenges. By the end of 2018, there are 720,731 poor ethnic minority households, accounting for 55.27% of the total poor households nationwide (meanwhile the proportion of ethnic minority population accounted for only 14.6% of the country's population). Therefore, the gap between rich and poor among regions has not been narrowed, especially in the Northern mountainous areas and the Central Highlands.

How to make the ethnic minorities not be left behind is the determination of the whole country. In particular, the Government has issued many policies for ethnic minority people to create jobs, stabilize their spirits and improve their lives.

In the period of 2016-2018, the Government has focused on implementing policies to support socio-economic development in ethnic minority and mountainous areas. Especially, VBSP has given loans to 1.4 million ethnic minority households on the average of VND 30.5 million/household to develop production and increase income.

Over 1.4 million ethnic minority households are enjoying most VBSP’s inclusive finance services to improve business, production, job creation, increase incomes and living standard which contributes to sustainable poverty reduction and gradually mitigate the gaps between indigenous, mountainous areas with others in the whole country. To date, total loan portfolio for ethnic minority customers who are the poor and non-poor living in disadvantaged regions reached nearly VND 50,000 billion, accounting for 30% of the total. With the loan turnover is about VND 140,000 billion and the repayment volume of VND 86,061 billion. The average outstanding loan of each ethnic household was VND 34 million. Moreover, VBSP conducted some specific financial schemes only tailored for ethnic minority customers, such as: Lending program for production development for extremely disadvantaged ethnic households; Lending program for disadvantaged and poor ethnic households in Mekong river delta; Lending program on supporting production land and job change for disadvantaged and poor ethnic households; Loan for support socio-economic development in ethnic minority and mountainous areas in the period of 2017-2020 with 05 key areas as: support for residential land; support for production land; support for living water; support for population stabilization and support for preferential credit.

4.3. Model of service delivery to remote and moutainous ethnic minority

After nearly 17 establishment and development years, VBSP has constituted a network coverage nationwide with 63 provincial branches, one Transaction Center located in its Headquarters, one IT Center, one Training Center with 7 training bases, 631 transaction offices at district level, nearly 11,000 transaction points at commune/ward level and nearly 200,000 savings and credit groups at villages and hamlets. VBSP has strong partnerships with mass (grassroots) organizations and local authorities in its credit delivery model. Through this network, VBSP covers approximately 92 percent of customers in the Vietnamese microfinance market and 87 percent of volume (MIX Market 2018). VBSP has a diverse set of lending instruments, with 20 credit programs for different types of lending needs, offered at a mix of subsidized and market rates.

VBSP is the only bank in Vietnam to reach the poor at rural, remote and mountainous areas through the innovative model of fixed-date transaction at commune/ward/town nationwide. It is one of the most effective and efficient delivery channels that help the last mile population in Vietnam access inclusive finance served by VBSP, mitigate travelling time and costs for borrowers. At communal transaction points, all inclusive finance programs including lists of active borrowers, outstanding loans, delinquency etc. are publicized to ensure transparent, public and adequate information at all level. On a fixed day of the month, the field staff of VBSP comes to the commune to initiate direct transaction with borrowers in terms savings deposit, loan application and loan payment under witness of representatives from local mass organizations, heads of savings and credit groups and relevant commune authorities. VBSP is efficient as it leverages mass organizations to originate, collect and monitor credit and use of people communes facilities to expand network.

VBSP is prestigious to be a directly supported financial channel to sustainable poverty reduction and social security. It is the only policy bank in Vietnam established to implement the National Program on Poverty Reduction and the Government commitments on poverty reduction with international community.

VBSP’s expertise is to provide financial products & services for the poor & other last-mile population for sustainable poverty alleviation, financial inclusion development and social security to accelerate socio-economic development. From only three credit schemes in 2003, VBSP is currently implementing over 20 credit schemes and some foreign funded projects. Following is some large-scale credit schemes:

In order to apply digital financial services into operation, VBSP has been developing the digital banking platform serving the poor, women and low-income populations. VBSP will launch the mobile banking service by 2020.

VBSP provides financial services in conjunction with mass organizations to collaborate on credit underwriting and monitoring.  VBSP entrusts parts of the lending process to four mass organizations, including the Women’s Union and Farmer’s Union, by establishing Savings and Credit Groups (SCG) consisting of 5 to 60 members living in the same area. The SCGs are entrusted by VBSP to collect monthly interest and deposits from members and conduct some other tasks in the lending process, while individuals still have the responsibility to repay the principle loan. The SCG is not responsible for repaying the loan when the borrowers fail to do so. Each SCG has its own Management Board consisting of two people (the Head and Deputy Head) selected by its members. The operations of the group are subject to the direction, monitoring and inspection of the Commune People's Committee, and the entrusted mass organizations. VBSP pay fees to the mass organizations and commissions to the SCG's Management Board.

Over 17 years, VBSP has delivered financial schemes to 100% communes, wards and towns across the country; particularly in ethnic minority areas, extremely disadvantaged communes, remote and border areas. Loans have been provided to over 31.8 million poor, near poor households and policy beneficiaries with total amount of over VND 433 trillion. Policy credit helps more than 4.5 million households to cross the poverty line, attracts and  create new jobs for over 3.4 million laborers; more than 3.5 million disadvantaged get loans for study; build 9.9 million clean water supply and sanitation works in rural areas, over 11 thousand flood shelters for poor households in central provinces, more than 105 thousand houses over flood for households the Mekong River Delta and nearly 528 thousand houses for poor households and policy households with no housing in the country; over 112,000 laborers go to work overseas for a certain period of time etc. VBSP has contributed to reduce the national poverty rate in Vietnam from 26% in 2003 to 6% in 2018.

The inclusive finance of VBSP has reached to 100% of communes, wards and townships nationwide, with priority given to remote and extremely difficult communes. The majority of ethnic minority households living in ethnic and mountainous areas have enjoyed VBSP inclusive financial services. Accordingly, VBSP services have helped ethnic minority households to develop production, improve living standard and escape of poverty, including:

Inclusive finance has changed the perceptions of ethnic minorities, allowing them overcome their inferiority complex, low self-esteem to borrow a loan and improve their business efficiently. At the same time, it has helped to solve the basic and essential problems of life in ethnic minority and mountainous areas, helping ethnic minorities to gradually improve their quality of life, reduce illness, illiteracy and social evils. Ethnic minorities have started running business, creating jobs, gradually improving production management level and capital management level. They step by step get out of poverty and get rich in their own homeland, preventing evils of usury in rural areas and ethnic minority areas as well as become more confident and affirm their social status.

In the future, the VBSP will continue to carry out inclusive finance services for needy households and ethnic minority people, particularly in the Southwest region, Central Highlands and Northwest region.

Thanks to the supporting policies, many ethnic minority households have escaped from poverty and become rich. Mr. Ha Van Son, Vice Chairman of Nam Nhun District People's Committee (Lai Chau), said that the implementation of the government's policies has contributed to the development of the ethnic minority‘s life. Through these policies, the percentage of poor and near-poor households has decreased year by year. 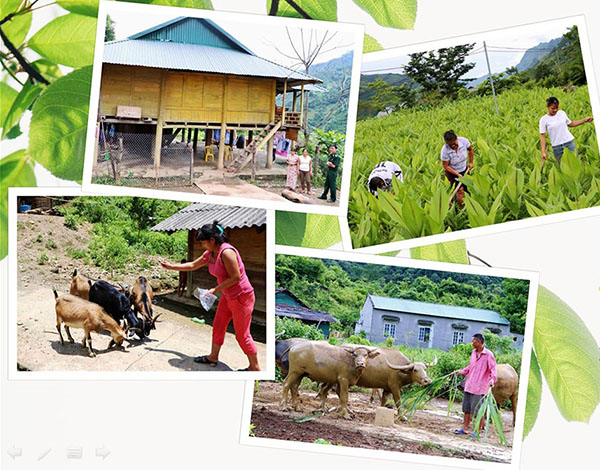 With the integration of central and provincial programs and projects, the life of the extremely difficult ethnic groups in Lai Chau province has become better

For example, Mr. Lu A Tien's family in Nam Sao 1 village, Trung Chai commune (Nam Nhun district). He is one of the leaders in farming and economic development of the Mang people. Mr. Lu A Tien said: “I, as well as the Mang people, was very poor before. We almost did not know what to plant and what to breed. When being provided buffaloes by the government, I followed breeding instructions. After getting used to raising animals, I continued to breed more cows and goats; plant more arrowroot, turmeric in home garden and upland. Just like that, the herd of buffaloes, cows and goats grow to nearly a hundred. The sale of cattle, arrowroot and turmeric each year is more than VND 100 million. Now, my family escapes from poverty and our children have a good education”. 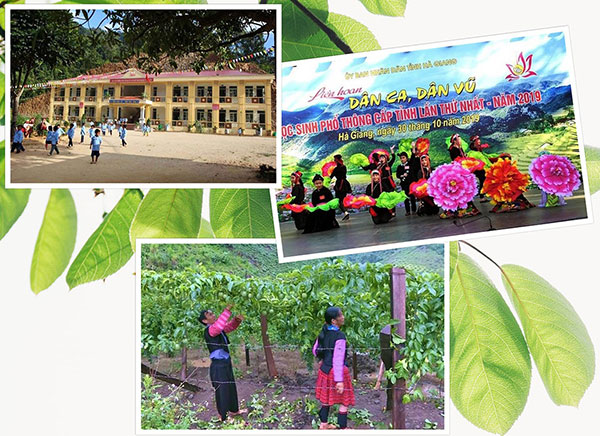 With the integration of central and provincial programs and projects, the life of the extremely difficult ethnic groups in Lai Chau province has become better

Accessing to VBSP’s inclusive finance services has changed their way of thinking, allowing many ethnic minority people to overcome their inferiority complex to apply for a loan, and successfully develop their own business. The preferential credit has also helped hampered loan sharks, he said.

In the future, the VBSP will continue to carry out preferential credit policies for needy households and ethnic minority people, particularly in the Southwest region, Central Highlands and Northwest region. Thus, VBSP needs to be invested more capital to expand loans for people. Management levels, who issue guidelines and policies on communication, fostering and training for people, should have full experience and skills to implement economic development projects. Generalizing information technology for ethnic minority people also should be paid attention so that they can quickly access knowledge, find job and sales opportunities to domestic and international markets.