(VBSP News) To deliver policy credit to poor households and other disadvantaged groups, VBSP applies the lending approach: Direct lending to borrowers; or direct lending but entrusting some steps in the lending process for four SPUs (so-called entrusted lending).

This model has mobilized the general power of the whole socio-political system from central to grass-root level to provide loans to millions of the poor and other last-mile populations. It facilitates the close connection among VBSP, local authorities, SPUs and SCGs in terms of helping the poor access rural finance services. It also creates favorable conditions for socio-political unions to improve their organization, operation and duties, staff capacity building. Their participation and observation shows the transparency in utilizing the Government resources for the poverty reduction target, contributing to improving the policy credit quality, sustainable development and social stability. 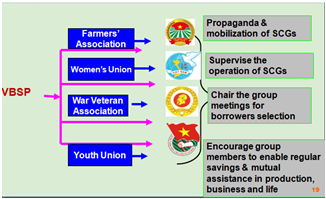 Collaboration between SPUs and VBSP in lending process

VBSP has signed inter-ministerial agreements with four SPUs (Vietnam Women Union, Farmers Union, Veterans Union, Ho Chi MinhYouth Union) for entrusted lending to the poor and other disadvantaged groups and then its provincial and district branches shall sign entrusted contracts with local SPUs. Each SPU performs at four levels: central, provincial/municipal, district and commune. Following is some entrusted steps for four SPUs in the lending process.

SPUs conduct communication and dissemination about the Government policy credit programmes for the poor and other disadvantaged groups. They take over establishing and managing SCGs under the Rule on SCGs organization and operation issued by the VBSP Board of Directors2. They remind SCG leaders to participate in VBSP’s commune transaction and other events, instruct group members to conduct transaction with the bank, encourage them to follow the SCG’s rule, practice savings deposit behavior, help each other and share mutual experience in using loans for right purpose. Moreover, they coordinate with VBSP to hold training classes for their union staff and SCG leaders.

They supervise and review the operation of SCGs in line with the rule on  SCG organization and operation issued by VBSP, participating and steering directly in SCGs meetings in terms of SCG establishment, vote or change of SCG management board, set up  the operation rule and customer selection

They receive and notify the result of loan approval to SCGs and then SCGs inform to group members, coordinate with VBSP to resolve customer cases that deliberate not to repay debt, overdue debt or run away, guide customers to arrange the request for risked debt treatment due to objective reasons (natural disasters, fire, epidemic outbreak etc.), urge group members repay debt on time. They also coordinate with VBSP to assess and classify the SCG operation quality as well as conduct measures on SCG capacity building. VBSP directly take charge of managing loans, disbursement, principal collection on due, follow up loan records and disburse loans at CTPs under the witness of SPUs and SCG leaders. VBSP pay entrusted fee for SPUs based on the cost norm approved by Ministry of Finance from time to time.