Online conference on training and scientific research in VBSP 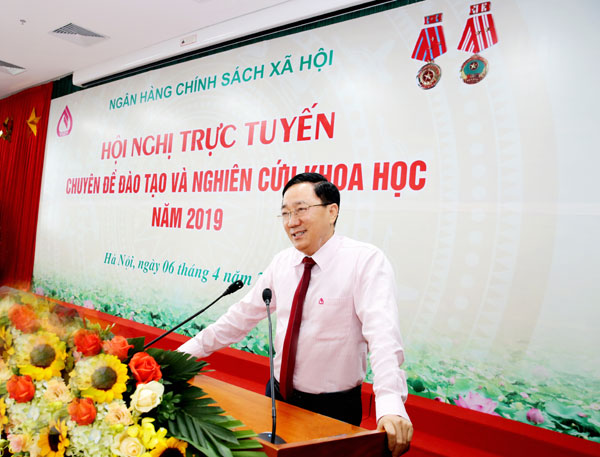 The Presidium hosting the Conference

Focus on training and enhancing the human resource quality

With the motto "Solidarity- Stability - Development", VBSP is always concerned about conducting the training and scientific research. Since 2007, the whole system has organized 297 training courses for 16,366 trainees at provincial and municipal branches, thousands of staff from local mass organizations, poverty reduction committee; village heads; management members of savings and credit groups.

In the field of scientific research, VBSP has actively participated in researching projects which are highly appreciated by the Governor of the State Bank and the VBSP's leaders.

The training and scientific research have improved the levels for all officials, contributing to the completion of the tasks assigned by the Party and the Government. Total lending turnover in the first quarter of 2019 reached VND 19,171 billion, increasing by VND 3,026 billion compared to the same period last year serving nearly 567,000 the poor, the near poor, newly escaped from poverty households and other disadvantaged groups. The landscape of the Conference

The focus on capital mobilization and disbursement from the beginning of 2019 has contributed to timely supporting for production and business, creating jobs for more than 52,000 employees, of which more than 1,100 workers working abroad for limited terms; helping nearly 5,500 disadvangtaged students; building more than 256,000 safe water and sanitation facilities and building nearly 1,800 houses for policy beneficiaries...

Moreover, VBSP continues to direct all subsidiaries to implement well the Directive No. 40-CT / TW of the Secretariat of the Party Central Committee on strengthening the Party's leadership to social policy credit. As of March 31, 2019, total local funding amount that levels of committees and authoritieshave entrusted for VBSP reached VND 13,472 billion. Some provinces and cities transferred large amount of entrusted funding such as Hanoi, Binh Duong, Da Nang, Ba Ria - Vung Tau, Quang Nam, Dong Nai, Can Tho, Gia Lai,... Delegates at branches participated in discussing and commenting

At the conclusion of the Conference, Mr. Duong Quyet Thang - General Director summarized the process of establishment and development of VBSP. Stemming from the Bank for the Poor with 498 officials and 3 preferential credit programs, up to now, VBSP has nearly 10,000 highly qualified staff and effectively implements preferential credit policies thanks to the contribution of training and scientific research.

Mr. Thang said that each branch must concentrate on training and organizing regular and extraordinary emulation programs for staff. The scientific research projects which have been tested must be carried out and applied more effectively in practice, therefore, each individual and unit will be encouraged and motivated to study deeply on activities of VBSP.

Regarding the functional work, Mr. Thang agreed the results of completing the plan assigned by the Prime Minister in the first quarter of 2019 of VBSP. The next task for the whole system is continuing to maintain and increase outstanding loans; preparing capital source to timely support for the poor and other disadvantaged groups to improve business and production. For new loan programs for poor/near poor households launched from March 1, 2019, according to the Decision 12 / QD-HDQT issued by VBSP's Board of Directors on increasing lending rate and loan term, the General Director asked all branches over the country to check carefully clients who have real borrowing needs, especially prioritizing poor households who are in need of loans for production and husbandry.

The General Director emphasized the key task in 2019 is organizing a preliminary conference of Directive No. 40-CT / TW of the Secretariat of Party Central Committee on strengthening the Party's leadership on social policy credit, therefore, the whole system must focus on promoting activities in all fields from now on so that credit quality can be improved in such a sustainable manner. From the central to local level, the propaganda must be promoted so that local authorities can understand and pay attention to the activities of VBSP, thereby increasing resources for customers to focus on business, production and escape from poverty.

At this conference, the Emulation and Commendation Council of VBSP also announced the rewarding decisions of the General Director to branches that have gained outstanding achievements in the first quarter of 2019.