(VBSP News) Over the past years, hundreds of poor households in Ha Tinh province have borrowed preferential loans from VBSP, which helps them invest in breeding, farming and developing farming models so that they can escape from poverty, raise income and contribute to developing the local socio-economy. 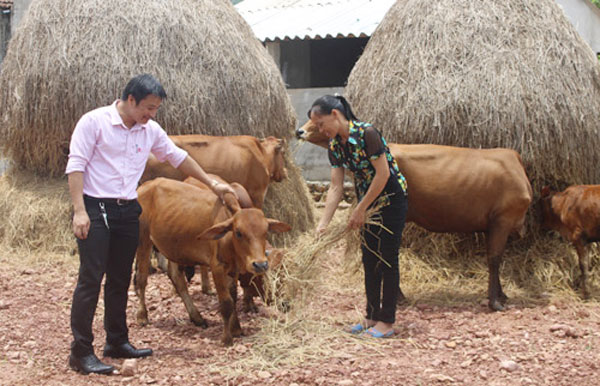 Nguyen Thi Duc's family in Huong Son district has been the poor household for many years. However, since she had access to VBSP's preferential capital, she invested in breeding cows, wild pigs and chickens, planting fruit trees such as oranges and pomelos. The number of her cows from just a few ones now has increased to 20.

Ms. Duc sold some cows and continued to borrow VND 50 million  from the VBSP's job creation program to invest in planting orange trees. Ms. Duc estimated that  the orange garden started to harvest this year and her family will have good income next year.

Another example is Ho Tu Nam's farming Ky Anh district. Mr. Nam confided: “My wife and I just made the farm so we needed capital to invest in production. Luckily, in 2013, with VND 50 million  from VBSP's job creation program, my family expanded the scale of growing safe vegetables, raising pigs and ostriches. Thanks to the application of science and technology into animal husbandry and cultivation, we got high income. Therefore, we paid the interest and debt on time for VBSP”.

According to Mr. Nam, in 2016, his family continued to borrow VND 50 million  from VBSP to expand the model of breeding and afforesting. Currently, his farm has 20 cows, 10 pigs and over 500 chickens. Besides, he also planted 10 hectares of acacia forest. His farm not only brings high income for his family but it also creates jobs for 3 local workers, with the salary of  VND 4 million  / person / month.

According to the Deputy Director of VBSP in Ha Tinh province, Hoang Ba Dong, thanks to the synchronous and effective deployment of customer support and debt recovery, at this time, most customers pay debts on time and overdue debts account very small percentage.

In 2019, based on the allocation of funds, VBSP in Ha Tinh province will continue to implement the lending programs with preferential interest rates. At the same time, VBSP in Ha Tinh province also focuses on prioritizing capital for communes of constructing new countryside and effective projects. Besides, the bank continues to closely coordinate with the departments, branches, mass organizations and local authorities in the transfer of science and technology, guiding business methods, the use of capital for borrowers.

"In order to timely meet the demand for borrowing loans of the people, over the past time, VBSP in Ha Tinh province has timely collected the due debts to create the revolving lending capital”, Hoang Ba Dong said.