The workshop was organized for the aim of exchanging the practice and solutions to push ahead finance for agricultural and rural development in Vietnam, as well as learning more about experiences of other countries and recommendation from international organizations on this issue.

Delivering the opening speech, Mr Ha Hai An, Deputy Director of International Cooperation Department of the SBV emphasized that financial inclusion is deeply concerned by the international community and the Government of Vietnam because of its importance and meaningful contribution to economic growth, especially for the low-income and vulnerable communities. Financial inclusion is considered as a crucial pillar of growth, development and poverty reduction with many practical benefits, thereby contributing to efficiently mobilize and utilize the social resources. Financial inclusion is conducted via 5 major substances including: to develop new products; to diversify the network of financial service providers; to develop the financial infrastructure; to protect users of financial services; and to disseminate financial knowledge. Presented at the workshop were leaders and specialists from the Non-cash payment Development Program; the United Nations Capital Development Fund (UNCDF) and Agrobank – Malaysia. The discussions were focused on experience of agricultural – rural finance development in the region and all over the world; The benefits of e-payment in the agricultural sector to achieve the Sustainable Development Goals (SDGs); The accelerating on financial inclusion for women in agricultural sector; Experience in establishing the agency network for the Agrobank to serve rural economic development in Malaysia; the challenges, solutions to support and promote agricultural - rural finance were actively discussed by representatives from Vietnam Bank for Social Policies (VBSP), VMFWG, BTCA, UNCDF, Agrobank Malaysia, Credit Department of the SBV. 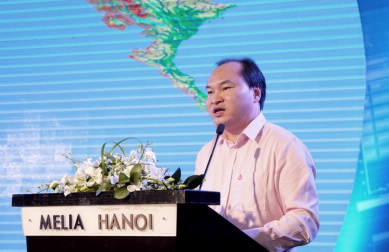 At the workshop, Mr. Phan Cu Nhan, Director of International Cooperation from Vietnam Bank for Social Policies shared experience in studying and the development plan on mobile banking service of the Bank, emphasizing that VBSP will make a contribution to the goal of financial inclusion development. The VBSP was established on October 4, 2002 to implement financial inclusion targeting disadvantaged groups. Over the past 15 years, its soft loans have helped more than 4.5 million families escape from poverty; created jobs for 3.5 million people, including 111,000 overseas guest workers; and enabled over 3.5 million poor students to continue education. The bank has also funded the construction of approximately 10 million rural clean water and environment treatment facilities; 520,000 houses for poor people and welfare policy beneficiaries and about 116,000 storm and flood-resistant houses, mostly in the Mekong Delta. Up to now, the bank’s total outstanding loans stood at an estimated 167 trillion VND (7.34 billion USD) with bad debts accounting for only 0.43 percent.

At the workshop, Mr Tran Van Tan, representative Credit Department of the SBV stated that, over the past time, in order to facilitate the agricultural and rural development, the Communist Party of Vietnam and the Government of Vietnam have issued many important guidelines and policies, including Resolution No.26-NQ/TW dated August 5, 2008 by the Central Committee on agriculture, farmers, rural to direct the whole political system to participate in the cause of agricultural, rural development and improve the farmers’ living condition; Decision No.899/QĐ-TTg dated June 10, 2013 by Prime Minister on approving the Project of “Restructuring the agricultural sector towards improving added value and sustainable development”; Decision No.1600/QĐ-TTg on the national target program on new rural development in the period of 2016 – 2020 (to replace Decision No.800/QĐ-TTg dated June 4, 2010 and Decision No.695/QĐ-TTg dated June 8, 2012 by Prime Minister) in order to build up the rural areas and improve the material and spiritual life for the farmers.