(VBSP News) Nearly 2 years ago, Prime Minister signed Decision No. 28 stipulating that newly escaped from poverty people can continue to get preferential loans for business purposes with a maximum loan of VND 50 million from VBSP. 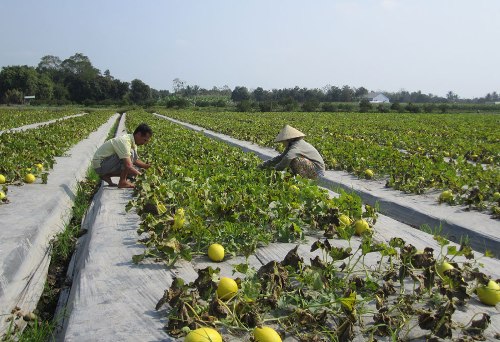 Over the past year, this funding has helped many people improve their income generation and have better livings, as recorded in Hai Hau district, Nam Dinh province, one of the first places to deploy lending to just escaped from poverty households.

In September 2015, Huong’s family was one of the first households in Hai Hau district to borrow money for just escaped from poverty, with a loan of VND 30 million. She concentrated on raising Red tilapia and planting Polyscias fruticosa. At that time, her fish pond was just like this, thanks to the loan, after a harvest of Red tilapia, her production was more stable than before, more equipments for production were also invested.

“Borrowing money to invest in raising fish and buying equipments, I get some profit to embank the pond, buy some facilities; we also planted Polyscias fruticosa. Later this year, we may earn about VND 30-40 million.”

Ms. Dung’s family was also eligible for loans to just escaped from poverty households in 2015. So far her family's property has changed significantly with 1080 m2 of Polyscias fruticosa and 1440 m2 of shrimp ponds. In favorable conditions, by the end of this year, her family can get up to VND 40 million from the fish pond and Polyscias fruticosa garden.

“After a year of harvesting fish, shrimp and crop in the garden, I made a profit and I invested in the pond and continued investing in production and breeding”

At present, in Hai Chau commune, Hai Hau district, Nam Dinh province, 11 households have borrowed loans for just escaped from poverty with total loan outstanding of more than 470 million VND. Thanks to the funding, most of the households has escaped poverty sustainably.

In the past, people had been able to dig the pond only, after getting long-term loans from VBSP, they will embank the pond. Firstly, making the pond wider, secondly, protecting environment and thirdly, saving cost of annual maintenance on loss of the pond’s bank.

However, funding of this program in Nam Dinh is now only able to meet the needs of more than 20% of just escaped from poverty households. In order to meet demand for loans, many solutions have been introduced.

In VBSP Nam Dinh province, besides the capital allocated by the Headquarters, VBSP also actively mobilized local resources as well as idle capital from local people to increase the funding resources for loans.

After more than a year of implementation, more than 560,000 just escaped from poverty households have borrowed nearly VND 17 trillion nationwide. However, besides getting preferential loans, people also want to have more programs such as transferring science and technology, guiding production techniques so that the just escaped from poverty households can proactively strive to escape poverty sustainably.

The program for just escaped from poverty households has been efficient, so the demand for loans has been increasing, how to prepare procedures to borrow for production and business under the program, please memorize following information:

Eligible borrowers of just escaped from poverty program are people with a per capita income higher than the near-poverty line. They must be certified by the People's Committee to be out of the poor, near-poor household list for 3 years at the maximum. Loan amount is flexible as agreed between VBSP and the borrower but not exceed VND 50 million.