VBSP News - The central province of Thanh Hoa raised a fund of more than 5 billion VND (215,000 USD) from individuals and organisations at a ceremony held on September 7 to support flood-hit locals, helping them overcome difficulties and stabilise their lives. 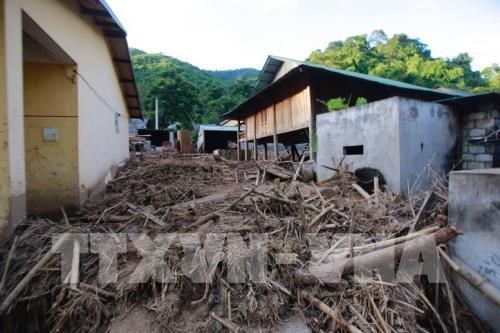 Of the total amount, the province’s police and the Vietnam Bank for Social Policies each donated 2 billion VND (86,000 USD).

Besides the amount mobilised at the ceremony, the Vietnam Red Cross Society’s Thanh Hoa chapter as well as organisations and businesses outside and inside the province gave aid worth 1.4 billion VND (60,200 USD), 340 million VND (14,620 USD) of which was in cash and the remainders were commodities like instant noodle, water bottles, notebooks and school bags.

According to statistics, flood left 12 people dead and missing while 13,000 houses have been inundated and 800 others swept away, collapsed or severely damaged. Thousands hectares of crops have been submerged in floodwater, and hundreds of head of cattle and poultry were killed.