(VBSP News) The coastal province of Ninh Thuận has asked the Government for more funds to improve the quality of life of ethnic minorities and local residents in mountainous regions. 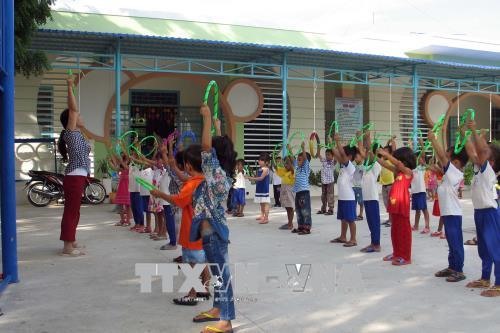 Lê Thanh Hùng, deputy head of the province’s Board for Ethnic Minority Affairs, said the province needs VNĐ365.8 billion (US$15.6 million) to provide land, housing and preferential loans to residents.

The province has 9,223 poor ethnic minority families who need assistance.

Lê Văn Bình, vice chairman of the Ninh Thuận People’s Committee, said that local authorities had provided houses for poor families and used financial aids to build houses for them.

The Việt Nam Bank for Social Policies has allocated VNĐ20 billion for loans which will be used to provide land for 85 households, water supply systems for 1,700 households, and assistance to 2,500 families who need help in changing jobs.

For the remaining number of households, the province lacks sufficient funds, Bình said, so the province has to depend on the Government for financial support.

The province has 37 communes and towns and 124 hamlets in ethnic minority and mountainous areas, with a total of 162,115 people, accounting for 23.5 per cent of the province’s population.

The ethnic minority and mountainous region covers a wide natural area, with nearly 291,000ha, accounting for more than 86 per cent of the province’s total natural areas. These are considered key strategic areas for the economy, defence and security, and environmental protection.

Moreover, the region has an abundant amount of land for development of industry, agriculture, forestry and eco-tourism services and products that preserve the culture of ethnic minorities.

The Government has issued many resolutions, instructions and action programmes on poverty reduction and economic development that have benefited locals.

Over last seven years, the provincial People’s Committee has integrated some programmes and projects, such as the National Strategic Programme, to get more than VNĐ5.9 trillion to build nearly 800 kinds of infrastructure projects of small and medium scale.

More than 96 per cent of households in the region are connected to the national power grid, while more than 75 per cent have water for usage.

Many localities in the region have set up special areas for agriculture which bring high economic value, raising local people’s incomes.

The region’s total production value has increased by 11.9 per cent per year, while last year it reached nearly VNĐ3.1 trillion.

The income per capita has risen from VNĐ12 million in 2015 to VNĐ17 million last year, which has helped reduce the number of poor households by 3 per cent in line with the National Povery Reduction Programme 30A, especially in Bác Ái District, where the reduction was 5.2 per cent.

The region now has 9,898 poor households, accounting for 28.7 per cent of the province’s total. — VNS