(VBSP News) The number of low-income households is growing in ethnic minority areas, with the poverty reduction tempo in these communities also lower than the national, according to Minister-Chairman of the Government’s Committee for Ethnic Minority Affairs Do Van Chien. 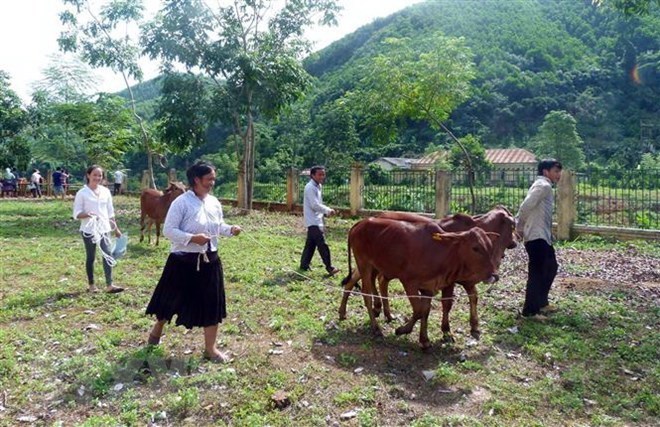 He released the information at a meeting in Hanoi on January 4 for the Central Steering Committee on national target programmes for the 2016-2020 period. Mentioning the national target programme on sustainable poverty reduction, Chien noted that ethnic minority people account for 14.6 percent of Vietnam’s population but the poor households in their communities make up 52.7 percent of the all poor families nationwide. The rate of poverty relapse is also higher in ethnic minority and mountainous areas, he said, adding that in the same localities, the development gap between these regions and others has widened considerably. He asked the Government to increase financial and credit resources to provide more loans for low-income earners through the Vietnam Bank for Social Policies (VBSP), instead of giving them free aid which will not encourage them to strive to escape from poverty by themselves. Deputy Minister of Planning and Investment Nguyen Van Hieu reported that in 2018, through the VBSP, 20 credit programmes were carried out with a total outstanding loans of nearly 187.8 trillion VND (8.14 billion USD), up 16 trillion VND from the previous year. Nearly 6.7 million impoverished households and disadvantaged people received loans. The household poverty rate nationwide has been brought down to about 5.35 percent, he added. At the meeting, Deputy Prime Minister Vuong Dinh Hue said the Government has targeted breakthroughs in all spheres for 2019, so the national target programme on sustainable poverty reduction, as well as the one on new-style rural area building, can keep up with this speed of progress.  Mechanisms and policies need to be made more carefully to limit poverty relapse and encourage disadvantaged people to make more knowledgeable financial decisions. He requested ministries and sectors to make poverty elimination criteria more detailed, while authorities also have to work harder to eradicate loan sharking in rural areas.